Secretary-General Ban Ki-moon launched the ‘Zero Hunger Challenge’ at Rio+20, where all countries were invited to work for a future where every individual has adequate nutrition and where all food systems are resilient.

“In a world of plenty, no one – not a single person – should go hungry,” Mr. Ban said during the launch of the initiative at the United Nations Conference on Sustainable Development (Rio+20) in Rio de Janeiro, Brazil, on Thursday night. “I invite all of you to join me in working for a future without hunger.”

“Zero hunger would boost economic growth, reduce poverty and safeguard the environment. It would foster peace and stability,” Mr. Ban added, calling on farmers, business people, scientists, civil society and consumers to join the challenge by honouring past promises and work together to put an end to hunger.

Rio+20 has delivered a pretty good text for farmers; now it’s up to governments and agencies to act on these words, and put into place the financial commitments and practical policies that can truly deliver. Photo: N. Palmer (CIAT)
by Vanessa Meadu

The ‘Zero Hunger Challenge’ has five main objectives: to achieve 100 per cent access to adequate food all year round; to end malnutrition in pregnancy and early childhood; to make all food systems sustainable; to increase growth in the productivity and income of smallholders, particularly women; and to achieve a zero rate of food waste.

Inspiration for the initiative came from work being carried out by many countries and organizations to end hunger, including Brazil.

“Big problems call for bold goals. The Zero Hunger Challenge can help us mobilize political commitment, the first step to eradicate hunger,” said FAO’s Director-General, José Graziano da Silva, said at a high-level meeting in Rio de Janeiro today. “This is a personal challenge from the Secretary-General, but one that all of us should answer, as individuals and collectively. FAO embraces this challenge of a Zero Hunger World.

Planet Near Tipping Point: Every person needs to work towards making a greener, safer world. 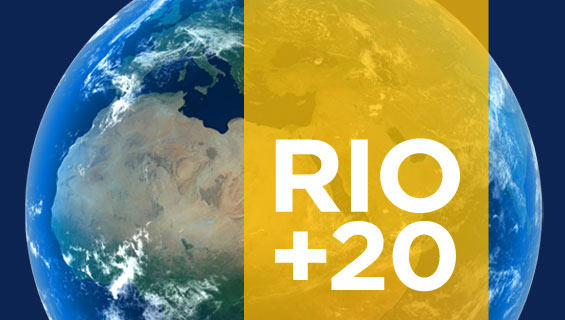 “World leaders having failed them, many in Rio believed that progress on environmental issues must be made locally without the help of international accords. That probably is the only way ahead to avoid the approaching catastrophe. The time has come when every country, every state, every local body, every individual and every organisation – public or private – needs to work towards a greener and safer world.”

Despite a dire warning issued by the United Nations Environment Programme (UNEP) about the catastrophe that Planet Earth was headed for, the recent United Nations Rio+20 Conference at Rio de Janeiro on sustainable development proved to be a damp squib.

Branding the current era as the “Age of Irresponsibility”, the UNEP, in a 525-page report, warned that “the earth’s environmental systems are being pushed towards their biophysical limits beyond which loom sudden, irreversible and potentially catastrophic changes.”

Painting a grim picture, the report indicated melting of the polar ice caps, desertification in Africa, deforestation of tropical jungles, spiralling use of chemicals and the emptying out of the world’s seas of fish as some of the myriad environmental disasters that pose a threat to life as we know it.

The report adds that “several critical global, regional and local thresholds are close or have been exceeded… Once these have been passed, abrupt and possibly irreversible changes to the life-support functions of the planet are likely to occur, with significant adverse implications for human well-being.”

One such threshold was crossed only recently.

Monitoring stations across the Arctic this spring detected more than 400 parts per million (ppm) of carbon dioxide (CO2) in the atmosphere. Readings of 400ppm and higher have been recorded in Alaska, Greenland, Norway, Iceland and even Mongolia. Currently, only the Arctic has attained the 400 level, but the unrestrained way the things are going there is no reason why the rest of the world will not follow soon.

The number isn’t quite a surprise, because it’s been rising apace for some decades. It is a disconcerting new milestone. Years ago, it passed the 350ppm mark that many scientists consider the highest safe level for carbon dioxide in the atmosphere for restricting the rise of global surface temperature below 20 C (over pre-industrial level) to save the planet from catastrophic changes. But, globally it now stands at 395 and already rising seas and extreme weather patterns are much in evidence.

Indicating the gravity of the problem, climate scientists say it’s been at least 800,000 years since the Earth saw carbon dioxide levels in the 400s.

Before the industrial age the level was around 275-280 ppm. It has been in 300s during the last sixty years. Scientists say that increasing use of fossil fuels like coal and oil caused the alarming rise in the levels of CO2.

The Arctic Ocean with leads and cracks in the ice cover of north of Alaska. Photograph: Courtesy Eric Kort/Jet Propulsion Laboratory/NASA
The world’s air has reached what scientists call a troubling new milestone for carbon dioxide, the main global warming pollutant. Monitoring stations across the Arctic this spring are measuring more than 400 parts per million of the heat-trapping gas in the atmosphere. The number isn’t quite a surprise, because it’s been rising at an accelerating pace. Years ago, it passed the 350ppm mark that many scientists say is the highest safe level for carbon dioxide. It now stands globally at 395. So far, only the Arctic has reached that 400 level, but the rest of the world will follow soon.

Those who are committed to 350ppm say that it was the upper limit for the planet if we wished to have it “similar to the one on which civilization developed and to which life on earth is adapted.” The figure is virtually irrefutable as a constant flow of additional evidence from many directions supports it. They claim that though the atmospheric concentration of CO2was around 390 parts per million and the temperature increase is still a shade below 10 C yet it would be prudent to restrict it to 350 ppm to completely obviate the risk of surface temperature rising to and beyond 20C.

Already, they claim, the world has witnessed rapid melt of the Arctic ice, high-altitude glacial systems and perennial snowpack in Asia, Europe, South America and North America, the rapid and unexpected acidification of seawater, warming of seas and rise in their levels, excessive intense short-spell rains, frequent violent storms and damage to coral reefs disrupting the marine eco-system and depriving numerous fish of their habitat.

Many scientists feel that since the CO2 level has reached the 400 mark it would be impossible to immediately arrest its further rise. One cannot shut down all thermal power plants and stop use of gasoline all at once.

Over 80% of world’s energy sources emit large amounts of CO2. During the last few decades the rate of emissions has gone up, particularly since the 1970′s as a result of increased consumption and growth in population.

High economic growth rate in the emerging economies has further boosted up the amount of greenhouse gases in the atmosphere. None of these countries would like to cutback on its developmental effort as uplift of millions of poor is involved. The CO2 level is, therefore, set to rise.

Kevin Anderson, a climate scientist, feels that avoiding dangerous climate change is no longer possible because the temperature rise is already close to 10 Celsius “with effects formerly assumed for 2°C”.

According to him, temperature rise of 40 C by 2060 is very likely “given the level of action taken so far on climate, world’s economic realities and the short window of time remaining for limiting the average surface temperature rise to 2°C or even 3°C” – a frightful scenario.

If a rise of 10 C is causing such havoc, widespread death and destruction that is likely to occur on the rise of 40 C just cannot be imagined. It will be Apocalypse itself.

Some climate researchers, however, offer consolation. They feel that that 2 °C was likely to be exceeded at the level of 550 ppm, at 450 ppm there would be a 50% likelihood of limiting global warming to 2 °C and that it would be necessary to achieve stabilisation below 400 ppm to give a relatively high degree of certainty of not exceeding 2 °C.

With the global CO2 level pushing 400ppm restricting its rise to 450 seems to be an impossibility. Perhaps, 475 or 500ppm would be a better target (with all the risks involved) from where humanity, with a concerted effort, could try and bring CO2 concentrations back to 350. But that would require significant reduction in emissions.

Unfortunately, that concerted effort of world leaders is not quite visible. The much-heralded Rio+20 proved to be a fiasco. Martin Khor, executive director of the Geneva-based South Centre, said “We’ve sunk so low in our expectations that reaffirming what we did 20 years ago is now considered a success”.

“Everything has been kicked down the lane a few years”, said another participant from G 77. Nothing was agreed upon; what was agreed upon is to have a few more conferences even if, in the mean time the planet gets saturated with CO2.

World leaders having failed them, many in Rio believed that progress on environmental issues must be made locally without the help of international accords. That probably is the only way ahead to avoid the approaching catastrophe. The time has come when every country, every state, every local body, every individual and every organisation – public or private – needs to work towards a greener and safer world.

Deforestation and logging in Mindanao

“Poems are made by fools like me, but only God can make a tree,” the poet Joyce Kilmer wrote.

Yet,   in Mindanao, not fools but environmental criminals continue to unmake and wreak havoc on one of nature’s gifts to humanity.

A week ago, while accompanying a client on a project inspection trip to the eastern part of Mindanao, I witnessed a scene that was not only scandalous but even gravely criminal…  read the article >>>>

Deforestation and logging in Mindanao Photo courtesy of Francesco Verinesi

Deforestation and logging in Mindanao  Photo courtesy of Francesco Verinesi

The sight was truly sordid: while heavy equipment and construction workers are busy paving  and concreting the arterial roads in these parts of eastern Mindanao …  read the article >>>>

[AMMAN] Jordanian environmentalists have challenged a government decision to push ahead with a controversial project to channel water from the Red Sea into the Dead Sea – which has shrunk dramatically over the past 20 years…. read more >>>  Environmental concerns for Red Sea-Dead Sea project – SciDev.Net.